I use Python on a somewhat regular basis, but I’ve always had a half-ass understanding of object oriented programming (OOP). I’ve also never learned how to write unit tests (gasps). So in an effort to change all this I’ve slowly been working through Python the Hard Way to help fill in the gaps of things I’ve never learned (or at least never used) in Python. I highly recommend it. That being said, I was working through some of the exercises for OOP and unit tests and realized now would be a great opportunity to make a program which simulates John Kruschke’s ‘Traveling Politician’ example of the Metropolis Hastings Algorithm.

I also happen to be a huge fan of the show The Wire. So to make this a bit more enjoyable, the politician in my example is none other than Clay ‘Sheeeeeeeeeeeeeeeeit’ Davis.

How does it work?

The politician flips a coin to determine the direction of the proposed move. Moves to the west are always accepted (moves to Island of higher population). Moves to the east occur with a probability of:

For the purposes of the example, any island outside the range of the 5 mentioned have zero population and therefore would never possible moves.

To determine if the politician moves to the east or stays put on the current island the value of p(move) is compared with a value from a spinning wheel which is a uniform random number generator that gives us a value between zero and 1. If the the spinner has a value less than p(move) the proposed move is accepted (i.e. politician goes east) otherwise the politician stays put.

End Result: After enough iterations the distribution of the frequency islands were visited will be an estimate of the relative population of the Islands.

Goal: Clay Davis and his driver Damien ‘Day-Day’ Price need to pick up money from various know drug spots. They want to do their pickups proportional to the amount of money each spot generates.

Politician: Clay Davis with assistance from his driver.

Same rules apply, but some changes:

Here is what you will see when you run the script:

A short opening about Clay along with the relative populations (money counts) for each spot. Each time you run the program the populations are shuffled unlike the original traveling politician example (i.e. the populations don’t have to be increasing east to west to be estimated): 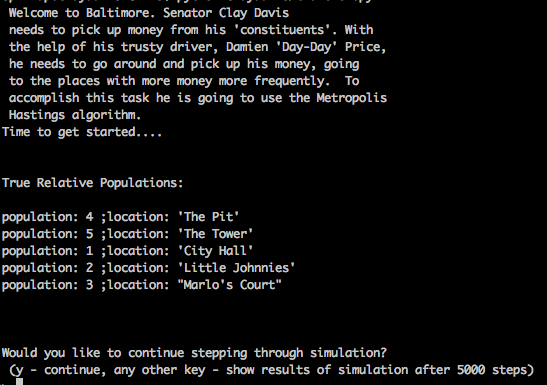 If you choose to step through Clay will select his next spot based on Metropolis Hastings… and of course he will have something to say.

If you decide to stop following Clay step by step, the simulation will run through the remaining 5000 iterations and you will see a histogram showing the frequencies (scaled to fit the command line) the Baltimore spots were visited along with the relative frequencies assigned to the spots at the start of the program. 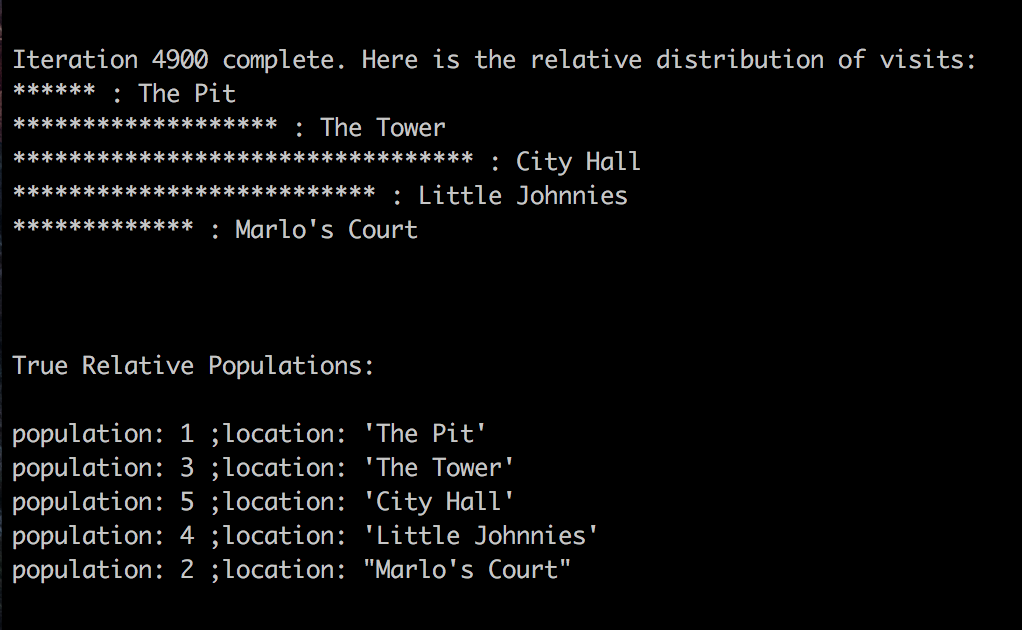 You can run an example of this by grabbing the code from this gist:

The repo I’ve been working out of here, but as of now different branches (the gist is from the ‘thewire_shuffled’ branch) are different versions of the game.